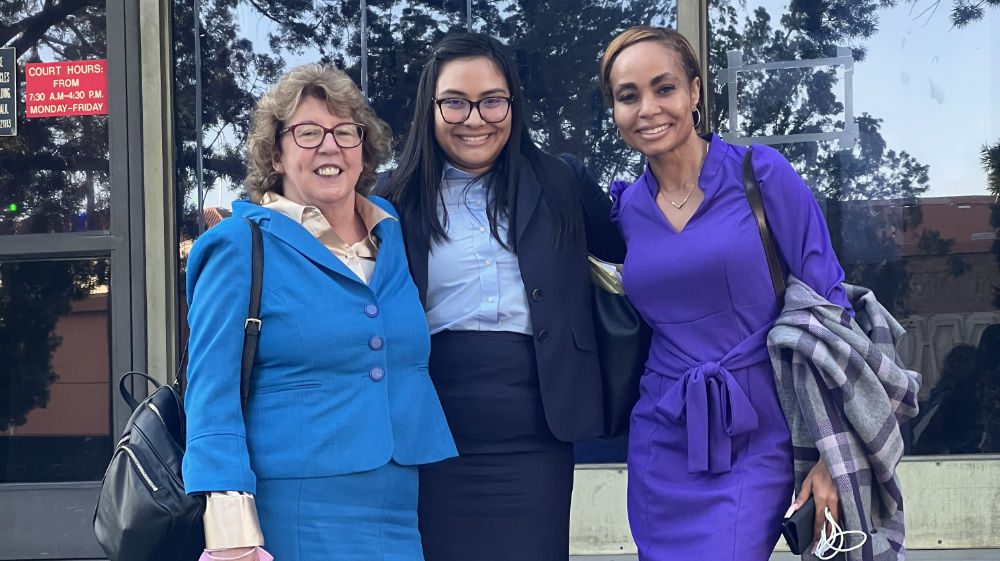 (LOS ANGELES, CA): Friday’s $10M Verdict in the sexual harassment case of Odom v. Los Angeles Community College District and Howard Irvin Case No. BC724401 marks a victory for women in the arenas of both higher education and law.

This was among the first of its kind, a Teaching Trial in a case that helped to shine a light on LACCD’s administration’s refusal to respect and protect its female professors. Veteran employment attorney Maryann P. Gallagher of the Law Office of Maryann P. Gallagher, her associate Viridiana Aceves along with co-counsel and millennial employment attorney Jamie E. Wright of The Wright Employment Lawyers, teamed up to represent plaintiff Dr. Sabrena Turner-Odom against the Los Angeles Community College system (LACCD) and its employee, Vice President Howard Irvin. The diverse and dedicated Los Angeles-based legal team successfully secured a verdict of $8.5M against LACCD and $1.5M against Howard Irvin, setting a precedent for future students and faculty alike.

“It is an honor to help Dr. Odom and stop LACCD from letting this happen again to any teacher or student,” says lead counsel Gallagher. “For four years, LACCD refused to acknowledge the harassment and refused to protect Dr. Odom. While Irvin took everything away from this beloved professor and public servant, and I am proud to represent her; I sincerely hope she feels heard, validated, and can move toward healing.”

“The jury corrected a wrong by the LACCD today for its failure to investigate and take action against Vice President Howard Irvin,” comments Wright. “Because of this injustice, a woman whose greatest dream was to empower the area’s lower-income students lost every sense of safety on a campus that once felt like home.”

This landmark trial is a shining example of California’s recent legal changes allowing promising young attorneys like Wright and Aceves the opportunity to experience high-profile cases as associate counsel. Previously, assuming a key role in a prominent case like Dr. Odom’s would have proven difficult – if not impossible – for millennial attorneys like Wright, even with the decade of successful legal experience brought to the table. Gallagher, a renowned employment attorney with numerous wins against global corporations, served as lead counsel and empowered Wright and Aceves to demonstrate their expertise in supporting her client’s search for justice.

With this victory, Dr. Odom and her trial team hope to force LACCD to change its policies, taking complaints of sexual harassment seriously, and that Howard Irvin will never be allowed to supervise or teach female students again. With extensive experience in labor negotiations and arbitrations, ADA disputes, civil rights, negligence, breach of contract, premises liability, and more, the trial team aims to carry this momentum forward onto future caseloads. With this verdict serving as a win for women everywhere, Gallagher , Wright and Aceves will continue to fight against sexual harassment in a world desperate for more fundamental victories like these.

About the Law Offices of Maryann P. Gallagher:

Maryann P. Gallagher has been a Plaintiff’s Attorney practicing Employment Litigation for over 30 Years. She has tried over 50 cases to verdict. In addition to Employment verdicts, including sexual harassment, age discrimination, disability discrimination , and whistleblower cases, Ms. Gallagher has been awarded the coveted Consumer Attorneys of Los Angeles Trial Lawyer of the Year award , only the second woman in the organizations 70 year history to achieve this honor. She hopes that by having more “Teaching Trials”, there will be more future women Trial Lawyers of the Year . In addition to being a trial attorney, Ms. Gallagher has also handled her own appeals, publishing several cases and creating new areas of law in Sexual Abuse and HIV infliction cases.

About Jamie E. Wright and the Wright Law Firm: